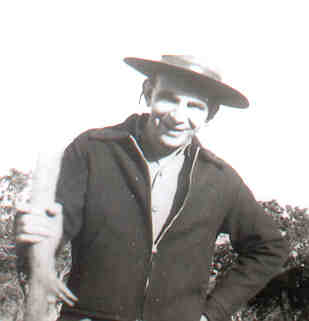 How do you begin a story about a man that influenced hundreds of boys, a scouting pioneer who brought each new scouting innovation to Ft Worth, a master psychologist who could instinctively determine what each scouts needs were, a simple man who rode a bike delivering messages at General Dynamics (later named Lockheed). Yet he exhibited an almost childish exuberance tempered by generations of boys.

John Edward “Ole Man” Gillespie was born on September 19, 1905. The family lived at 1109 E Annie street close to downtown Ft Worth. Gillespie initially went to St Ignatius School (next to St Patrick’s Cathedral) and then transferred to St Mary’s during grade school. Because of family finances, he never went to high school. John worked as a runner for the Ft Worth/Denver Railroad (downtown), as a helper at the local grocery store, and later co-owned the first 3 pump gas station in Ft Worth called the Missouri Avenue Garage.

The infirmity of his father when he was very young, the strong faith of his mother and the struggle of those early years explain the affinity he had for always taking in orphans, the troubled, or the destitute. Gillespie never gave up on a boy (as his practice of keeping boys name on the roster a couple of years after their departure is a testimony to this fact). Some called him the “Pied Piper of Scouting” as he chose to welcome every boy of every consequence. He knew firsthand what many boys were experiencing as he himself shared many of the same feelings.

There was one organization which gave his family a helping hand – The Knights of Columbus (KC’s). A fraternal organization of Catholic men founded to assist the widows, orphans and families virtually destitute – such as young Gillespie’s. Men of honor would assist with the small details of life, invite the family to monthly dinners, and anonymous contributors would put a little cash into the hands of his mother. As John and Robert grew older and their circumstances were better, they joined the KC’s and became the men who would then be the chivalrous Knights. John would accumulate over 50 years of KC service in his lifetime. Many of them assisting the boys at St Theresa’s Orphanage, serving as a perennial KC 759 officer, and anonymously providing Scouting equipment for those who couldn’t afford it from the north side of Ft. Worth. And so it was that KC Council 759 chartered the first 4 Scout Troops in the Ft Worth Area Council during 1927 … with Gillespie Scoutmaster of Troops 32 and Troop 19. However, 17 years later, and not one to put aside a new opportunity, Gillespie accepted a new challenge sweeping the nation in the 1930s and 1940s.

John Gillespie’s work in Catholic Scouting began in 1944 when he facilitated the first awardees of the Ad Altare Dei Award in the Ft Worth Area Council (later renamed Longhorn Council): Charles Bush, Gene Witkowski and Larry Jo Rich. Gene Witkowski would later become a priest and rise to Msgr Witkowski. Since Mr Gillespie participated in every new Scouting innovation, and due to the significant increase in Ad Altare Dei awardees, John was named the first Chair for the Ft Worth Committee during 1958 to help administrate and ensure all Catholic Scouts had a chance to earn this award. Mr Gillespie organized all the Scoutmasters of Catholic sponsored units together so that the lists of awardees rose to 100 or more each year. As a result, David Nichols, Gene Witkowski, Joe Schumacher, John Hennessey, Tim Thompson, and Joe Scantlin realized a vocation and became Catholic priests within the Diocese of Ft Worth.

Through the annals of time, legends may be measured by the influence they have had and the lasting tributes afforded them. Although he had no inclination or aspirations toward higher position or accolade, the manner in which he carried himself brought to him a great deal of fraternal love and popularity amongst his peers. He was to you what you needed him to be in your time of life.

Scouting recognized him with every eligible award it could bestow on him. The final tribute … Dedication of Worth Ranch “Ole Man” Gillespie Campsite (Ole Man was a nickname given him by his Scouts when he was 22 years old) to his memory was a legacy that his “children” continued to respect 30 years after his death. Although there need not be any required documentation of this fact to those who knew him, it is only proper to communicate his works so that future scouts know him more than just “Ole Man” Gillespie.

His 49 year legacy is of service to all Scouts and we recognize his contribution to the faith journeys of hundreds of boys throughout the Diocese of Ft Worth.
[Family] [Cactus Honor Fraternity] [The Legend Begins] [Ole Man as Mentor]
By John Ryan